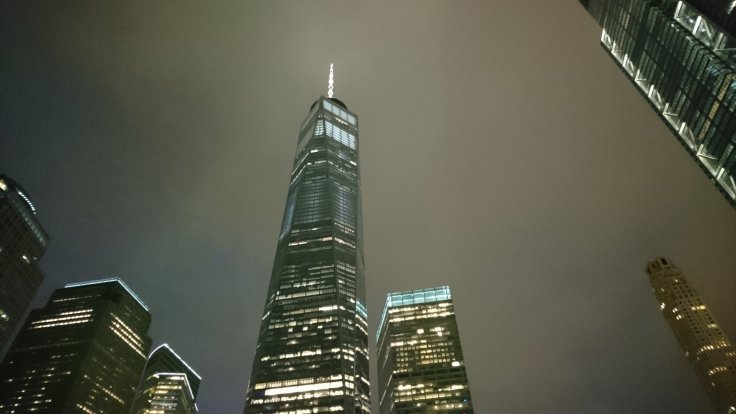 I’m always surprised by how calm & peaceful the West Village is at night. I don’t remember it that way – I remember crowds and cheerful shouting and lines at restaurant doors and the smell and lighter-flash of cigarettes everywhere. And yet here it is, Tuesday nine or ten PM east coast time… and this is a photo of a street, with no one on it, and just a distant glare of lights from a taxicab a few blocks away.

Or to put it another way: every time I walk through the West Village at night, I feel more as if the end of the world already happened, and no one noticed, and now it’s the aftermath.

It’s not that things are totally deserted; they’re not. It’s not that the area’s unsafe; as far as I can tell, it’s not. There are small groups of people, twos and threes walking peacefully home, holding each others’ hands or the leash of a small cheerful dog. Fragments of overheard conversations are things like, “but I’m romancing you!” and, “she’s thirty-five, man? What are you doing?!” (which sounds unreasonable until I add that the two guys having this conversation were, in my estimation, themselves only twenty-two or twenty-three years old). A tall college-aged woman in a long t-shirt style dress and a sturdy-looking man about the same age played some version of tag-plus-hide-and-seek down the empty streets, ducking in and out of doorways and laughing at each other. A skinny man in a hat and a worn but still stand-out suit played a viola on a streetcorner, its case open in front of him as a hopeful target for donations. He played well as far as I could tell, and unlike many street musicians, used no backup speaker. I gave him a little money, and he asked if there was a song I’d like to hear.

The bakery was closing as I walked past, the staff inside wiping down counters and slinging on backpacks. A few restaurants had cozy yellow lights in the windows and a few people seated at tables, talking quietly.